Secondly we were getting very anxious about our Support Coaches which were being kept out in the open. We also had the long term position of our 21-inch gauge collection and the ongoing restoration of 80098 to consider.

The answer to all these problems was not easy or cheap, but if they were going to have a long term future then it was now the time to make a big decision. Fortuitously at this time, a parcel of land was available for development adjacent to the Midland Railway Trust Butterley branch line. The only viable scheme would involve removing 10,000 tons of earth to create a flat area for a railhead, as the ground sloped back and up from the existing Butterley branch track. Every yard we went back with the building dramatically increased the quantity of excavation and a minimum of 75 yards was required to erect this building. 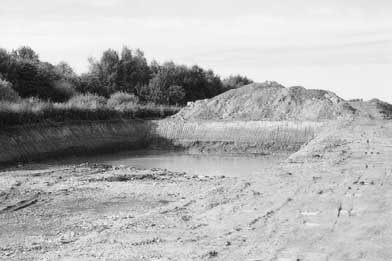 By the end of 1993 we had the makings of a Roman amphitheatre with three feet of water in the bottom-at this time no drains were on the site, and so it remained until the Summer of 1994.

Construction plans were approved by the Planning Authority in time for an August start with the foundations, by which time the deep water had all but dried up. September '94 saw 800 yards of drains laid, together with foundations for the steel framework, which followed in October. Steelwork erection is always dramatic as the building takes shape almost overnight. The size was awe-some. Bricklaying followed immediately on the outer walls and in January the sheeting was underway. Winter is not the best time to sheet a building but we were favoured with good weather and soon the building was watertight. This left the internal walls to progress through the latter part of winter. 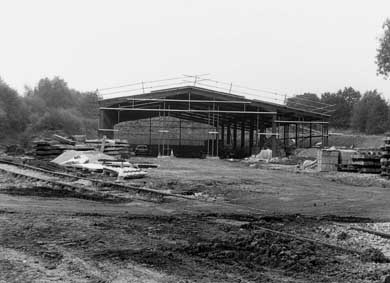 Some years ago a gang of men from the Midland Railway Trust recovered many artefacts from Westhouses Engine Shed before it was razed to the ground. Amazingly, a number of Midland Railway cast iron window frames and timber doors were saved. The window frames weigh up to a third of a ton; imagine the struggle to remove them at Westhouses-by hand! 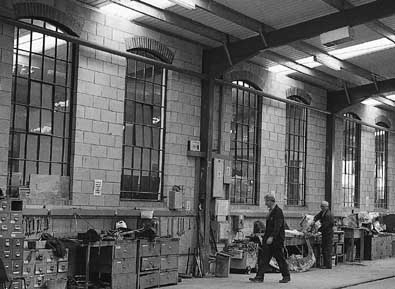 They had lain unused at Butterley for some years. Our thoughts turned to incorporating them internally. Measurements showed they would fit-just-so the frames themselves were shotblasted, primed and painted in BR Maroon. Glazing them was a task that no one fancied, with 365 panes of glass. The specialists did it in 4 days. Internal doors from Westhouses were cleaned up and used on the mess room. The Midland Railway joiners would have been proud of us.

The building works were completed in Spring 1995 and our thoughts turned to the railway fittings. Eric Riley persuaded us to have an inspection pit; funds had run down dramatically, so, if we were to have one, the only way was to build it ourselves. So we

did! One weekend we assembled for a crash course in steel reinforcement fixing. The words 'never again' spring to mind. Aching backs, blistered hands and scratched legs were carried by all. But most importantly, the task was done. The in-house designed pit had all mod cons: lights, steps, jacking shelf with the rails all flat bottom and perfectly level-an essential for setting up engines during rebuilds. The finished article is now paying us back for all the hard work.

The trackwork to the complex was designed for us and fitted the site like the proverbial 'cork in a bottle'. This was laid piecemeal from scrap track acquired, and turnouts made up from a collection of bits owned by the Midland Railway Trust.

All trackwork had to be laid working out towards the site entrance, with the essential ingredient being that the two ends meet in the right place when you finally join up. This they duly did and the last rail to be fitted was a welcome moment: the first vehicle, our coach 99040, was shunted in that day.

The Shed was certainly inspirational and very impressive: but we were desperately short of a good floor internally. Good fortune was with us. Two regular visitors to the Midland Railway Trust, who came to see the new shed and were told about our 'spent up' position, offered to finance the floor as a donation. We were speech-less and immensely grateful. The floor was laid in December '95 and January '96. We were now in a position to move in lock stock and barrel.

This fantastic donation also allowed a little cash to be spent on the niceties of life. The mess room was plastered and decorated and showers fitted in the bunk room. This has been followed by the plastering of the museum room and the fitting of central heating in this area.

In the spring, 80098 was moved in as a rolling chassis; the bunker had been taken in earlier. No 6233 arrived in February 1996, going straight in on arrival. No 80080 spent the 1996/97 winter inside before returning to traffic on the Midland Railway Trust; Princess Margaret Rose returned from Carlisle in May. After a boiler washout she was taken up to the shed along with coach 99041.

The 21-inch gallery was gathering all its residents and 6203 was shunted in during the summer. She was the last item to be moved in.

The Trust is now in the postion of being able store and exhibit its stock under cover when not working in traffic. The significance of this cannot be overstated. We have substantial security for our priceless collection for the long term future. The freehold of the site is now with the Trust which in turn adds further security. The facility has been used to hold a number of Mutual Improvement Classes for the Midland Railway Trust and we hope many more are to come.

The success the Trust has enjoyed since the 1990s, coupled with the additional acquisitions of DUCHESS OF SUTHERLAND and LMS Saloon No. 6320 meant the West Shed was compromised in terms of display ability and unable to house the whole collection of documents and other historic items in its custody. As such the Trustees drew a five year plan up to extend the facility. Plans were produced and costed, and an application made to the Heritage Lottery Fund. This has resulted in The Heritage Lottery Fund making a Grant of £610,000 towards a total scheme cost of £678,000.

The project encompassed a wide range of benefits and additions.

The project started in September 2003 and was completed in February 2005 and opened by His Royal Highness The Duke of Gloucester in October 2005. Support for the project came from Amber Valley Borough Council and EMMLAC who both made financial contributions. Vocal support has come from Derbyshire County Council, The national Railway Museum, and The Midland Railway Centre, with the latter making some physical contributions during the project by machining mechanical parts. 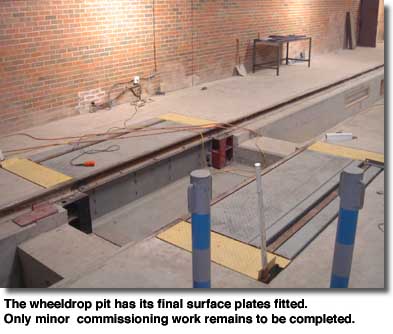 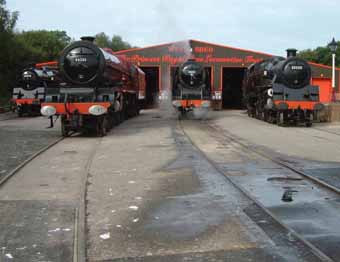