Designed by Robert Riddles, 80098 entered revenue earning traffic in December 1954 and was initially allocated to Plaistow m.p.d. (33A) where she worked the busy commuter services from Fenchurch Street to Barking, Tilbury, Southend and Shoeburyness.

She was collected new by Driver Frank Green of Plaistow Depot from Kentish Town and taken light engine to the L T & S. Driver Green became her regular driver for several years.

She left the L.T.&S. line in 1962 when the line was electrified and after a short spell in store at Old Oak Common Depot she was transferred to Shrewsbury before being allocated to Machynlleth Depot on the Cambrian route from where she worked local passenger services and a few freight trains on this rural route.

In July 1965 she was withdrawn from service having completed only 11 years from new. In January 1966 she was despatched to the Woodhams Yard in Barry, South Wales to be cut up. However fate was to save her as Woodhams turned their attention to cutting wagons and other scrap material for a number of years.

The wheels were re-tyred and much of the mechanical work completed, although in excess of 75% of the motion had to be made from new. Work on the overhaul ceased in 1993 and recommenced again in 1996 when the Princess Royal Class Locomotive Trust moved into their new premises, the West Shed.

The front fallplates-a common design feature on BR Standard locomotives-were made and fitted in new plate. All the locomotive steps were refurbished or new made. The bunker, which had been in the West Shed for some time, was painted internally and underneath in preparation for lifting on.

In the main workshops of the Midland Railway Trust (MRT) the side tanks underwent a programme of refurbishment for several weeks. The complicated structure on each tank has to be examined carefully for thinning and then remedial work carried out as required.

On these side tanks, which form a major part in the fabulous (sorry about this word, but they are nice) design of these locomotives, the beading round the top edge of the tank has always been an 'Achilles heel'. Because this bead was tack welded on when made it was soon prone to quilting. Our replacement has been seam welded, which is not an easy task on such a long and very thin strip. Both tanks were completed in early 1997. The completed tanks had the skilled hands of Eric Riley, the MRT Locomotive Superintendent, applying filler to attain a lovely smooth finish. Clearly it is much easier to do this when the tank is on the floor rather than high up on the locomotive.

Early 1997 saw both tanks and bunker fitted to the rolling chassis. One of the major items to be sorted out at this stage was the machining of the two leading coupling rods.

The major workshop activity continued on 80098 through 1997. In early March we collected the last item of missing motion from one of the other 80xxx-owning groups. It is akin to finding the last piece of a jigsaw and completing the picture-very satisfying. A new front draw hook has been used in preference to the existing one which was almost life expired.

In March the boiler arrived on an MRT well wagon, opening up a long list of work even though the work is completed. Experience with 80080 led to some items receiving better refurbishment, such as the mild steel pegs from which the ashpan is suspended. These were replaced with stainless steel, offering a much longer life. New crinolines, made for some time, are fitted and cladding is underway.

The boiler inspector, together with Wayne Jones from Resco, formally inspected the boiler (No BR5/1309) on Thursday 12th June 1997 and gave it a clean bill of health subject to some further NDT work, thus allowing the tubing to proceed in due course.

Work continued apace through autumn 1997 and spring 1998, with almost every working day seeing more parts fitted. Unfortunately delays were incurred through waiting for materials. The copper pipe deliveries took almost one year to get through. As with 80080, the final pipefitting proved to be a long tedious job.

A new cab roof was made and fitted by the 'Wednesday night gang'. The smokebox was fitted to the boiler in late summer 1997 and we are now becoming expert at the manufacture of these-this being the third.

Mick and Paul undertook the lion's share of work on the tubes, being well supported by Malcolm the MRT welder. Our electric band saw has served us well in the cutting of these to length.

Cladding of the boiler took place during the autumn and early winter months as did the necessary hydraulic testing.With all work now in new covered accommodation, rapid progress was made and the overhaul completed in 1998.

Having held certification for main line work on Railtrack and Network Rail the locomotive has visited various parts of the country. 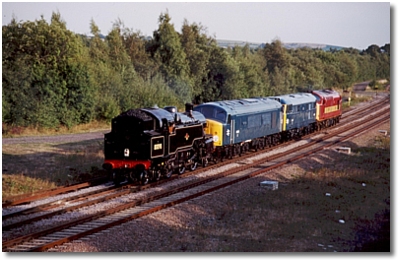 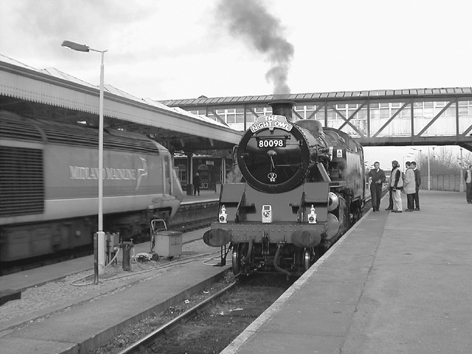 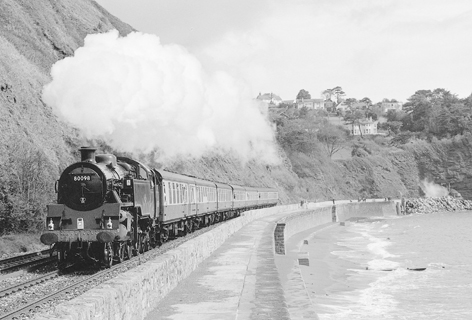 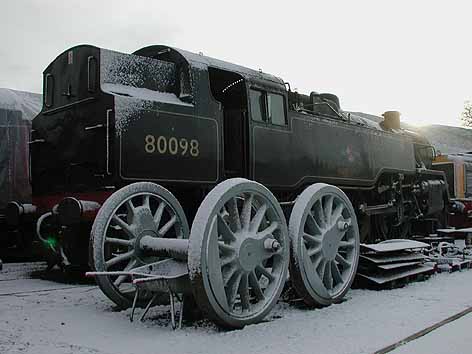 80098 stands at Cheddleton Yard on February 2nd 2008 on a cold morning following a fall of snow. She is being prepared for a photographic event later that day. Photo: Paul Wood

80098 was finally steamed during early August 1998, and underwent steam trials up and down the Midland Railway line for about 10 days. She was then repainted in readiness for her first run in steam on BR metals when she was towed to Toton Open Day on the evening of Friday 29th August, 1998. Since then she has clocked up several thousand miles of faultless running over various regions in the UK. She has spent the last year or so being regularly steamed at the Midland Railway with scheduled trains and used for driver training and experience courses. She also spent periods of time on hire to the Churnet Valley Railway and the East Lancashire Railway. In 2005, as part of the opening of the West Shed extension, HRH The Duke of Gloucester drove her from Butterley Station part of the way to the event. Following the boiler certificate expiring in April 2009, 80098 is currently undergoing a heavy general overhaul in the West Shed workshop. 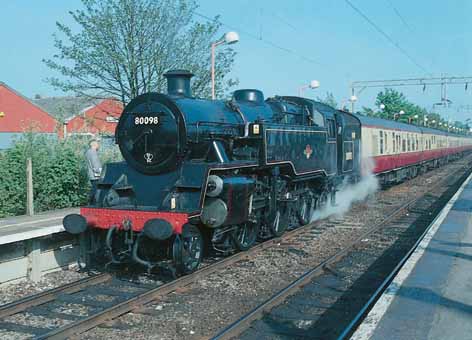 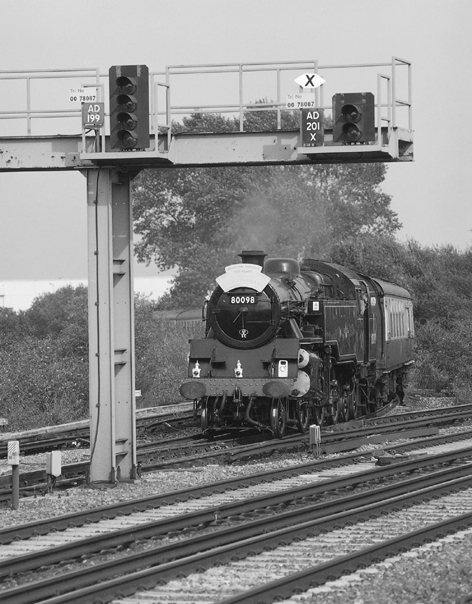 80098 drifts off the Maidstone branch into Paddock Wood station 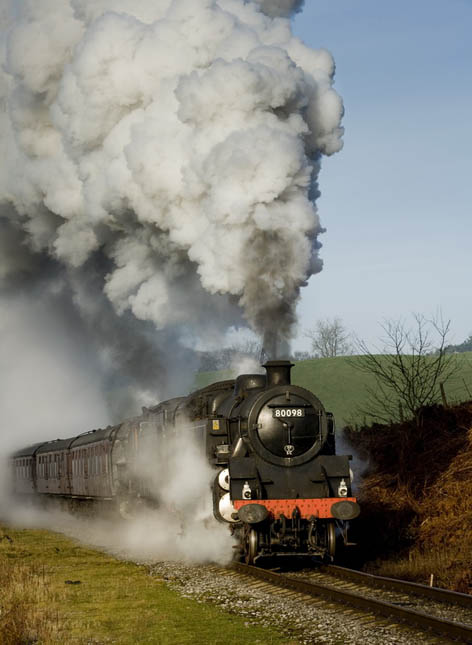