Designed by Robert Riddles, 80080 was built by British Railways at their Brighton Works and entered revenue earning traffic in March 1954 and was initially allocated to Plaistow m.p.d. (33A). Her work was in a pool of locomotives hauling the daily commuter services into Fenchurch Street – the London terminus of the London Tilbury & Southend line.

In 1962 when this line became electrified, she was moved to Croes Newydd (Wrexham) Depot in North Wales from where she operated on rural lines in the North and Central Wales area. She remained there until July 1965 when she was withdrawn from traffic and by January 1966 had been moved to Messrs. Woodham Brothers yard in Barry, South Wales where she awaited being cut up for scrap.

80080 remained in Woodhams Yard for 14 years succumbing to the ravages weather, metal thieves, and later preservationists removing parts. When the locomotive was purchased in Autumn 1980 all non ferrous and motion parts were missing and she was no more than a skeletal hulk. 80080 left Barry Yard on 4th November 1980 and arrived at Matlock, the then headquarters of Peak Rail, two days later.

Restoration to working order took 7 years and was completed in October 1987 at the Midland Railway, Butterley, where the owning group had moved the locomotive in 1983. Passed for main line running she clocked up 37,000 miles up to December 1997 travelling to many parts of the country, all by rail.

80080 seen at Ramsbottom with a passenger train from Bury to Rawtenstall on the East Lancashire Railway in the summer of 2011. 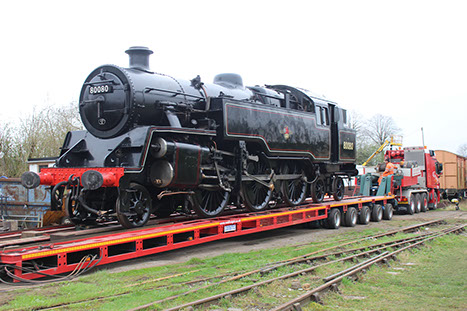 80080 loaded and being prepared for the move to the

This locomotive was the first to be restored to mainline condition by what is now The Princess Royal Class Locomotive Trust. She is currently nearing outshopping once again after a heavy major overhaul. Although not being returned to mainline standards, she will be seen on preserved heritage lines from autumn 2010. Her previous period of running and the work carried out during her first overhaul are recorded below.

80080 remained in traffic at Butterley giving reliable sterling service throughout 1996. Her annual boiler exam became due in December 1996 and the opportunity was taken for a limited amount of heavier maintenance.

A goodly number of new lap studs were fitted into the inner firebox laps replacing some of the remaining original rivets still left from BR days. This work necessitated a new brick (actually concrete) arch. At the front end, a quick repaint of the smokebox area also tidied up the front visually.

Immediately after running her last Santa Special at the MRT in late December 1996, 80080 came into the West Shed. A long list of items, some repair, some maintenance, were embarked upon.

All the motion was removed for remetalling. New bronze bushes were cast, machined, metalled and fitted to the little ends (the small ends of the connecting rods). With the motion off, we gave it a little bit more sparkle and a complete man day was spent buffing up the motion items. The axlebox oil baths which house the lubrication pads were removed and cleaned and the woollen pads washed out. New oil replaced what can only be described as a sludgy mess. You can almost feel the locomotive giving a sigh of relief having new oil lubricating her axles.

The piston valves were removed and new rings fitted with the valve spindle bushes replaced or re-metalled as needed. Next time round it is clear that the steam chests will require a rebore with new valve heads-measurements for casts were taken this time thus allowing the castings to be made and put in store.

Many small repairs of tanks and bunker have been carried out by the MRT welder with the half round beading being totally rewelded, thus taking away the horrible quilting that had developed over many years-some since 1954 when she was built. New side spectacle glass has been fitted replacing that which had become crazed with age.

The other major job was building up a new ashpan from beneath. Thanks to a superb job by Malcolm-the MR-B welder-a new double thickness ashpan is in place. This was the first time our new inspection pit-with lights to boot-was put to full use. 'How ever did we manage before?' was the cry! ('With a lot of pain and swearing' came the answer)

During the work underneath one of the driving wheel springs was seen to be a little bit distressed. We decided we had best have a look at it. On removal, the spring fell in half with more than six leaves fractured. As we keep new ones in store no delay was incurred and the old one is now back with us having been refurbished at the spring specialists in Rotherham. Again, for the spring replacement, the new pit was invaluable.

In the cab the seats have been renewed, together with all new floorboards. The roof vents have been overhauled and now open freely The chance was also taken to remove the sliding windows and use them as patterns for 80098's, which have now been made up and placed in store. The side tanks and front running plates have been repainted where necessary, thus restoring the lining which had all but disappeared, and then re varnished.

As such 80080 re-entered traffic in late February 1997 in ex-works condition and very nice she looked too.

After some continuous periods of daily running, several niggling items required further fine tuning. Arrangements were made for her to come into the West Shed after working on Sunday 8th June and so on a beautiful summer Sunday evening she majestically steamed up the Butterley Branch, reversed into the yard and proceeding to shunt the well wagon with 80098's boiler onto No 3 road, before she dropped her fire and moved gently onto the pit road. The fitting staff dropped onto her without delay and five minutes later the brake pull rods were off.

Next day saw the front cylinder covers off. Second hand piston rings were fitted with new brass slippers and by the end of the week the brake rigging was back on, with new pins and new bushes. The 'Wednesday Night' gang also took the opportunity of changing a driving wheel spring, the job done this time in three hours-the best yet!

80080 returned to traffic on Wednesday 18th June 1997 for daily service followed by the Patrons footplate evening. 80080 remained in traffic during the summer and autumn of 1997 hauling trains and carrying out duties on footplate experience days.

For the first time in her 10-year service at the MRT we experienced a series of failures with 80080's mud hole door joints. This resulted in a detailed inspection of each door, which revealed wear and tear developing. This in turn led to orders being placed for complete door renewal.

In early November the locomotive developed a major failure in the regulator/main steam pipe area. Examination next day revealed the total failure of the bend under the regulator, which had a hole large enough to put a hand through. This part is a steel casting and our experienced engineers said they had never known such a failure before.

Further examination revealed the cause as a faulty casting (dating from 1954) when it appears the core box of the pattern must have moved during the casting process thus making the casting thin-walled on one side and thick-walled the other. Needless to say, the thin-walled side failed. As such, a new bend had to be produced quickly in order to maintain 80080 in traffic. This was done and the locomotive was steam tested on 2nd December 1997.

In early 1998 80080 had heavy work carried out on the cylinders and steam chest with a rebore of both.

80080's last heavy overhaul was carried out during 2018 at the West Shed. 80080 was returned on long term hire to the East Lancashire Railway where it regularly operated passenger trains.

In 2020 80080 returned to the West Shed as the East Lancashire Railway no longer required the locomotive. Maintenance was carried out and the locomotive is now at the Ecclesbourne Valley Railway on long term hire.