This page was added to from the bottom up as progress was reported. You may wish to scroll down to the foot of the page to read it in chronological order.

80080 has been moved by road to the East Lancs Railway where she will be in use for the Steam Weekend 26th & 27th February.

80080 is currently at the SVR undergoing final boiler trials. She will be moving to the East Lancs Railway one the trials have been completed.

80080 seen at the SVR during the boiler trials. Photos: Simon Scott

After approximately one week of running in on the Midland Railway metals, 80080 was used on service trains during the 'Fireworks Day', top and tailing the trains with 6233 Duchess of Sutherland which was in its final day of steam before being withdrawn from service for her 'Heavy General' overhaul.

80080 stands outside the West Shed being prepared for her first day in service early morning on the 6th November 2010. She is still to be lined out and the final coats of varnish have yet to be applied.

80080 boiler back in frames for final time

After a very busy week at the West Shed, PRCLT engineers have prepared the boiler of 80080 to go into the frames for the final time. A steam test was successfully completed (out of the frames) on Thursday 29th July after which the boiler was lagged and the casing fitted. The boiler was lifted into the frames on Monday 2nd August. There is now much work to complete the locomotive. Watch this space for developments.

80080 stands in the workshops at the West Shed complete with its boiler on Monday 2nd August 2010.

80080 boiler arrives back at West Shed

Wednesday 16th June saw 80080's boiler return from the Severn Valley Railway boiler shops. The smoke box was temporarily fitted to the boiler and lifted into the frames on Friday 18th. Work immediately commenced on drilling in preparation for the final riveting which will commence on Thursday 24th after the boiler has been removed from the frames.

Having been lifted from the low loader the boiler is being positioned ready to receive the smoke box for the trail fitting into the frames of 80080 on Wednesday 16th June 2010.

PRCLT engineers Simon Scott and Nigel Barber assess the situation as the boiler is lowered very slowly and carefully into the frames of  80080 on Friday 18th June 2010. Photo: Paul Wood

With the boiler in the frames and in the workshops at the West Shed,

Progress continues with the heavy general overhaul, the axle boxes having been re-metalled and fitted in the frames. Re wheeling took place on Saturday 12th July 2008. The boiler is currently at the Severn Valley Railway boiler shop and expected back at the West Shed in the spring of 2009. 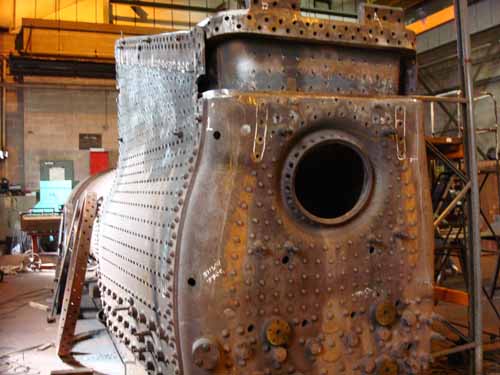 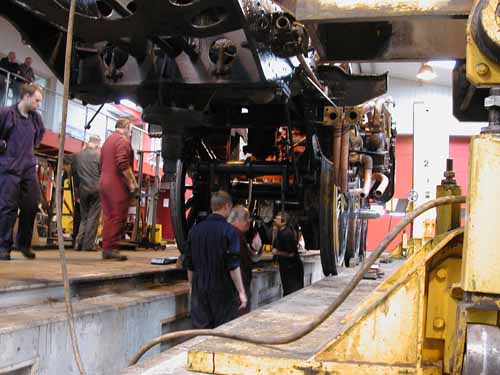 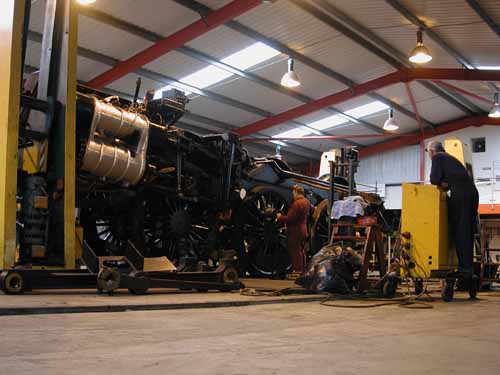 The two images above were taken on July 12th of the re-wheeling of 80080's chassis.

exclusively for members of the PRCLT Patrons Club. (see the 'Friends of the Duchess' page for more details) The frames were lowered onto the wheelsets with the Trusts Matteson jacks.