"There are not enough superlatives in the English language to describe a Princess Coronation locomotive in full cry.
We shall never see their like again".

On 5th July, 1937, to mark the crowning of His Majesty King George VI and Her Majesty Queen Elizabeth, the L.M.S. introduced the ‘Coronation Scot’ service of streamlined trains between London Euston and Glasgow Central stations, a distance of 401 and a half miles. To haul them Mr (later Sir) William Stanier, the company’s Chief Mechanical Engineer, designed a class of streamlined 4-6-2 express passenger locomotives called the ‘Princess Coronation’ type, a development of the ‘Princess Royal’ class introduced four years earlier.

Following the completion of the first ten of these streamlined engines that were built at the company’s Crewe Locomotive Works, a further five non-streamlined locomotives of the same class were built, and the fourth of these to be completed was No. 6233 ‘DUCHESS OF SUTHERLAND.’ The locomotive entered traffic on 18th July, 1938. These locomotives hauled the fast express passenger services such as ‘The Royal Scot’ and ‘The Mid-Day Scot' between London Euston and Glasgow Central as well as other expresses to Liverpool. Twenty-four streamlined and fourteen non-streamlined locomotives were built between 1937 and 1948.

The most powerful class of express passenger locomotives ever to run on a British railway, with six driving wheels 6 feet 9 inches in diameter, four cylinders each 16 and a half inches diameter x 28 inches stroke, and weighing 161 tons 12 cwt., the ‘Princess Coronation’ class could handle trains of up to sixteen coaches with ease, and were capable of developing over 3,300 horsepower. The six-wheeled tender held 4,000 gallons of water, replenished from water troughs between the tracks without the need to stop, and 10 tons of coal - sufficient to fire the boiler for the whole 401 and a half mile journey from London to Glasgow.

Along with her sister engines 6233 was also involved in working the overnight sleeping car trains from Perth to London Euston, and during the Second World War her driver on one such run, Percy Wilson, observed that the speed indicator had reached 110 m.p.h whilst descending Shap with her 600 ton train.

In May, 1944 No. 6233 was re-allocated to the Crewe North depot. In August, 1946 she was fitted with smoke deflectors, designed to carry the exhaust from the chimney clear of the driver’s cab, having been fitted with a double chimney three years earlier.

On 1st January 1948, and now renumbered 46233, she became part of the British Railways fleet and continued working from the Crewe North depot doing much the same work. She was repainted in a blue livery in 1950 and in a green livery in 1952. Briefly re-allocated to Carlisle in 1958 and Camden depot in London in 1960, she moved to Liverpool’s Edge Hill depot that September, and now began working such named trains as the ‘Merseyside Express’ and ‘The Red Rose’ to London Euston, as well as ‘The Irish Mail’ from Holyhead and other expresses from Birmingham, Wolverhampton and Manchester. Often now doing much less prestigious work, she was put into store on 14th October, 1963 being finally withdrawn for scrap in early February, 1964.

Unlike the majority of other members of her class that were cut up as scrap, DUCHESS OF SUTHERLAND was acquired by Butlins Holiday Camps and, after being repainted in LMS livery, she was moved to their camp at Heads of Ayr, in Scotland. There she remained on static display until 1971 when following a change in Butlins' policy, the several locomotives that they owned and were on display at various holiday camps throughout the United Kingdom, were moved to museums where they could be cared for and housed in accommodation befitting their importance. No 6233 was moved to Bressingham Steam Museum where she was used on the one third of a mile line at Bressingham for footplate rides during the next three years, until being taken out of service due to firebox problems.

6233 remained on display at the museum until 1996 when she was acquired by The Princess Royal Class Locomotive Trust. 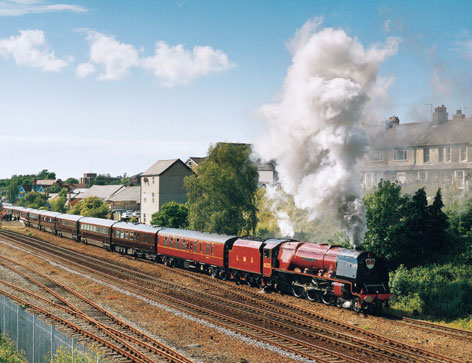 6233 Duchess of Sutherland hauled 'The Royal Train' on June 11th 2002 during Her Majesty Queen Elizabeth ll's Golden Jubilee Year, seen here leaving Llandudno Junction on the final leg of the journey to Crewe, having brought the train from Hollyhead. Photo: Martin Welch 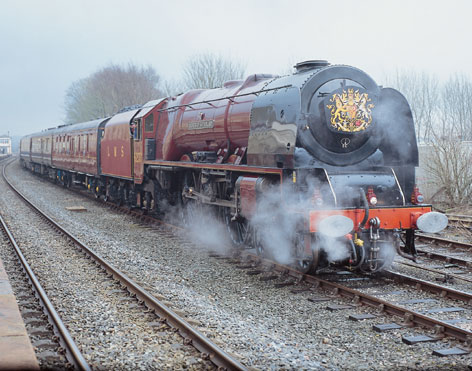 6233 Duchess of Sutherland at Hellifield carrying the Prince of Wales coat of arms headboard awaits departure with the Royal Train on 22nd March 2005. Photo: David Wilcock 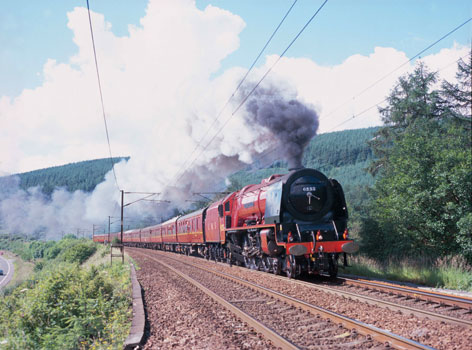 The locomotive was restored in LMS Crimson Lake livery with gold leaf lining, letters and numerals, and is seen above as she was in 1946 -fitted with a double chimney and smoke deflectors.

She was painted in LMS black for an extended boiler certificate period during 2010. On completion of the latest heavy general overhaul, which commenced in the winter of 2010 and was completed in 2012, she was painted in British Rail Green. It is planned to repaint 46233 into Crimson Lake livery in early/mid 2017, although this timescale is subject to change according to work commitments.

Over 63 years after she was first put into traffic by the L.M.S., and 37 years standing idle, she has hauled special passenger trains over some of her former territories and beyond, during which she has put in splendid performances. She has now at last truly become a real icon in the world of railway preservation after hauling the Royal Train as part of Her Majesty The Queen's Golden Jubilee celebrations in Wales in June 2002 and then again hauling the Royal Train in 2005 over the famous Settle-Carlisle line with HRH The Prince of Wales on board.

This restoration project is a magnificent achievement by a dedicated team of which the Princess Royal Class Locomotive Trust continue to be justifiably proud.

Braking system : Air brakes (was vacuum but this was changed at the first overhaul by PRCLT)

Coal Capacity in the tender : 10 tons

The locomotive burns up to 1 ton of coal every 40 miles of running, evaporates about 45 gallons of water per mile. As much as two tons of coal will be burning at once when the locomotive is working hard on a heavy train.

The locomotive's maximum allowed speed is 75 m.p.h. today although in service days this was a high as 100 miles per hour. 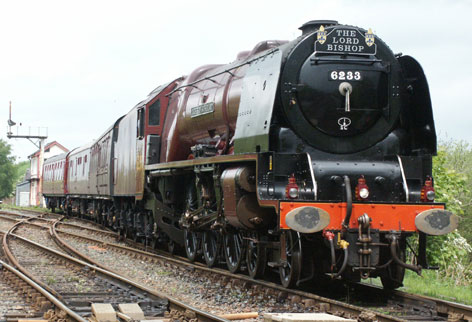 On Saturday 17th May 2003 Duchess of Sutherland hauled a special train in memory of Eric Treacy M.B.E., who is remembered as one of the most prolific railway photographers. The photograph shows 6233 at Appleby prior to the journey over the Settle to Carlisle railway.

6233 Duchess of Sutherland powers through Greskine on her