Designed by Sir William A. Stanier, Princess Margaret Rose entered revenue earning traffic in July 1935. During her twenty seven years of service to the LMS and British Railways, she covered one and a half million miles, carried four different liveries and was allocated to eight different motive power depots. On the 3rd. May 1936 she attained the class speed record of 102.5 mph. Following her withdrawal in October 1962, she was sold to Sir Billy Butlin and put on static display at Butlins Holiday Camp, Pwllheli, North Wales.

Still under the ownership of the Butlins group, she was moved to The Midland Railway Centre during 1975, arriving at Butterley on the 5th. November, where she remained as a static exhibit until purchased from Butlins in October 1988. She was then quickly restored to full mainline operating standards and returned to service on BR metals in June 1990.During late 1994, The Princess Royal Class Locomotive Trust was formed, and in early 1995 Princess Margaret Rose along with two 21 inch gauge Princess Royal class locomotives were transferred into the ownership of this charitable trust to secure their long term future.

Built as the first of the production batch of Princess Royal class locomotives at Crewe, order number 395, LMS lot number 120, and completed on 1st. July 1935 at a total cost of £9,692 for engine and tender, she entered revenue earning service on 4th. July 1935 hauling a train from Crewe to Euston, and was subsequently allocated to Camden (1B) on the 6th.

Princess Margaret Rose attained the class speed record of 102.5 mph between Tring and Cheddington during a vacuum brake test run between Euston and Crewe on 3rd. May 1936.

6203/46203 was allocated to eight different motive power depots during her twenty seven years of service, as shown below :

46203 was the only LMS pacific ever to visit Derby works for major repairs (to overcome loose outside cylinders and replacement of front end frames), this taking place between 10th. December 1951 and 17th. March 1952.

Locomotive No. 46203 Princess Margaret Rose was fully overhauled by British Railways in 1961. After that overhaul she only did some 6,000 miles in traffic for British Railways and as such was in exceptionally good order when withdrawn from service. Other than the years stood at Butlins, the locomotive was always kept in covered accommodation and this too kept her in good condition. When it came therefore to overhaul she was still in very good order. For the overhaul the largest element of work by far was labour.

On the whole of the mechanical side, the work involved stripping the locomotive into component pieces, cleaning and re-assembly with no materials costs involved. A very dedicated team of volunteers soon assembled under the leadership of Mr Eric Riley – the Locomotive Superintendent to carry out the project. The Midland Railway Trust facility provided covered accommodation as with all the other locomotives at the centre. With the locomotive being in very good condition very little had to be renewed.

A basic summary of renewals:

A number of the materials were used free of charge as a result of the Midland Railway Centre being given steel from local steel companies. The work took about 18 months from August 1989 to March 1990.A team of about 40 volunteers was involved with about ten of these forming the nucleus. The Midland Railway steam crane was used to lift all the heavy parts off and back on – again as with all other locomotive restorations at the centre. An estimate/guess for the costs of materials the figure would be about £10K The number of hours worked on the locomotive would be 12,000 over the project. This figure can be compared with a current similar project where every hour worked is recorded. She carried a number of liveries and was allocated to eight different motive power depots. 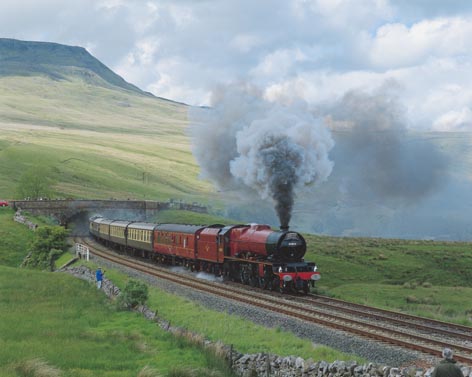 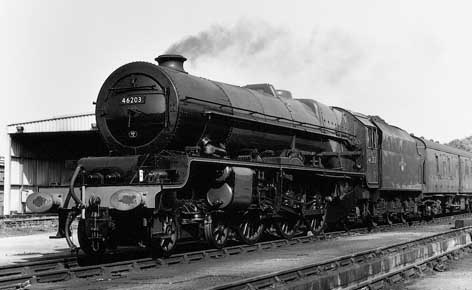 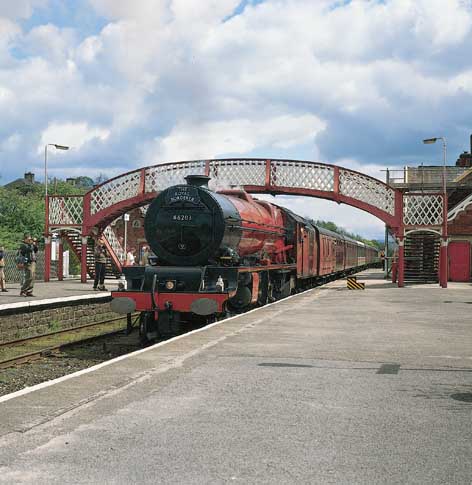 After being withdrawn from BR service in 1962, Princess Margaret Rose was purchased by Sir Billy Butlin for static display at his Pwllheli holiday camp, where she stayed until it was decided by the Butlins management to release all the locomotives in their ownership to appropriate museums on long term loan agreements.

Princess Margaret Rose left Pwllheli on Sunday 11th. May after six full weekends of toil by working parties from Butterley, and was displayed at Derby Carriage & Wagon works and Derby Locomotive works before finally arriving at the Midland Railway Centre on 5th. November 1975.

In 1988 after acquisition by the group, plans were soon put in place to restore her to mainline specification. This was completed in 1990, and on 11th. May she moved under her own steam for the first time since 1962.

46203 returned to BR metals on 15th. May 1990 moving to Derby to undergo axle weight adjustments and the loaded test run, which was completed successfully on 17th. May with a maximum speed of 85 mph achieved through Little Eaton.

The first of many revenue earning trips was run on 2nd June 1990 on the Derby-Sheffield-Derby triangle, and in the course of her mainline outings Princess Margaret Rose reached many other famous railway centres including Carlisle, Tyseley, Crewe, Bristol and Paddington, where on 26th. March 1994 she hauled a VIP special to Didcot to commemorate the end of Inter-City.

In all she completed 9,157 miles on mainline passenger workings out of a total of 18,078 before being withdrawn from service at Carlisle Upperby on 10th April 1996 and towed back to Swanwick on 29th May 1996, where she has remained since as a special exhibit on static display in the West Shed.

A major overhaul of the locomotive is now required, which would take up to 2 years, as the opportunity will be taken to fit an air brake system at the same time. The major element of the overhaul will consist of boiler work, which entails the removal and renewal of all the boiler tubes - 112 small and 32 flue, followed by a comprehensive examination of the boiler barrel, firebox and water spaces. Of the mechanical items, the inside motion will be taken down and refurbished. Inside cylinder pistons and valves will be removed for examination, and piston valve rings probably renewed. Finally engine and tender will be repainted.

The Trust would like to carry out this project some time in the future but with the total cost estimated to be around £750,000, there are no firm plans at present. 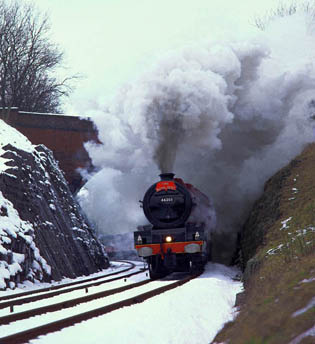 46203 Princess Margaret Rose at Waitby on the Settle Carlisle Line on 4th March 1995.