This Project is now complete and can be seen

on permanent display at the West Shed Museum

This page was added to from the bottom up as progress was reported. You may wish to scroll down to the foot of the page to read it in chronological order.

A unique occasion was experienced on 15th April when a group of 23 former B.R. Testing & Performance Engineers were able to re-live their experiences aboard 45050 as it was hauled by 6233 'Duchess of Sutherland' over Midland Railway - Butterley metals. In the first photo engineers from the late 1940's and 1950's period (L-R Denis Monk, Peter Howe and Alan Rimmer) are being filmed for the last part of the new video being made telling the whole story of 45050 soon to be accessible to visitors on screen as one of the new displays. The second photograph shows engineers from the late 1950-s and 1960-s, who worked with the vehicle in later years, simulating a test run that was also filmed as part of that exercise. Also in the train consist was the trust's two support coaches 99040 and 99041, newly re-liveried in crimson lake, and special saloon 6320 with its observation ends in which the two groups travelled, getting a superbly reminiscent view of the front end of the trust's 2-6-4T 80098 at work as part of the special push-pull train operation over the whole of the MRT line. (Photos Brian Radford for PRCLT) 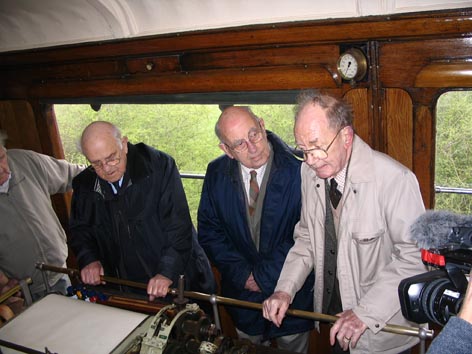 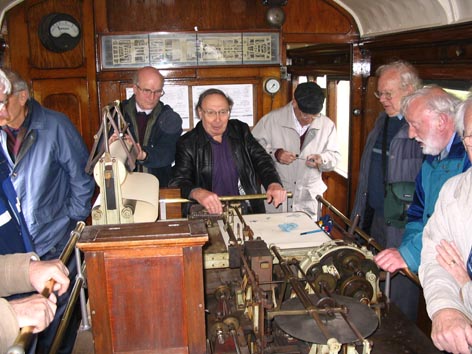 Below are two views taken by Testing Engineer Paul Mosley of the test train appproaching Swanwick Junction station behind 6233 at the start of the day. In the second view the special roadwheel of 45050 can clearly be seen. This, when lowered onto the rail head along which it runs, is used to drive the various mechanical parts of the table's test equipment including the mechanical integrator and also the moving paper test roll upon which the various outputs are recorded by means of coloured ink traces. The problems of keeping these charged with ink during a test is well illustrated by studying the second group photograph! 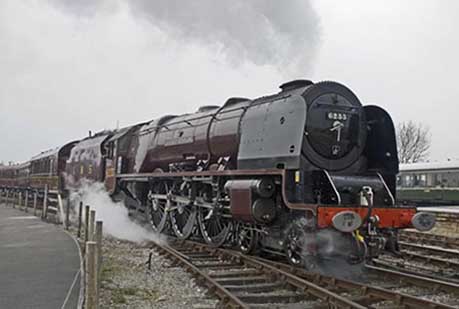 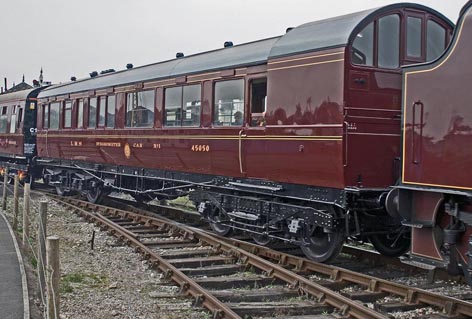 With the crimson lake paint applied, lining out and the signage is well underway. On completion the vehicle will be moved into the West Shed large exhibits hall where the interior will be the focus of activities. 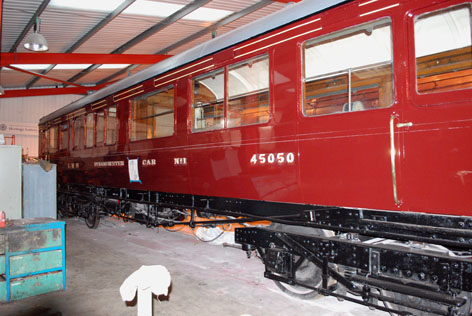 Preparation for the painting of 45050 is being carried out in the workshop at West Shed. Completion is planned for the end of November when photo's of the finished article will be placed on this page. Work will then begin on the interior in preparation for the display of the vehicle in the West Shed museum. 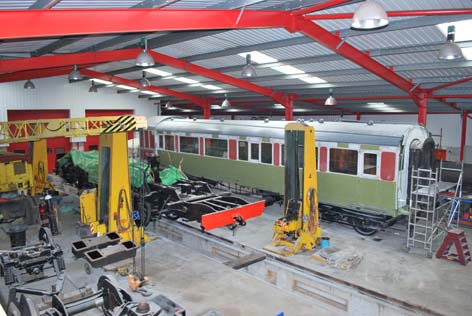 On Thursday, 23rd October the historic ex L.M.S. No. 1 dynamometer car 45050 returned in style by road, on an Alleley's low-loader, to the West Shed from Ramparts Carriage & Wagon Services workshops located in the rtc Business Park on London Road, Derby following completion of the conservation and restoration work. The work, which has taken four months, has seen the skeletal remains of the body structure clad both inside and out and the dismantled interior components repaired and re-installed in their correct places by a talented team of craftsmen. They have transformed what was an 'ugly duckling' into a good semblance of its former state, even though the photograph of the exterior only shows it in a multicoloured primed state with the original aluminium panelling etch-primed in red, restored upper bodyside and end mouldings in white and new lower bodyside and end steel panels in green. A new canvas roof has been fitted complete with refurbished ventilators and other fittings and inside all of the rotten panels removed and new oak-faced panelling fixed in place and stained to match the remaining original sections, whilst new ceiling panels have been installed where required and lighting units overhauled and re-fitted or replaced with like-for-like ones. The stove/grill room and the lavatory have been restored and their contents renovated and re-fitted whilst the staff compartment has been refurbished and, like the balloon end seating, only awaits the conservation of the fixed seating units and the return of the seat cushions and armrests being renovated by specialist conservator Michelle Harper. 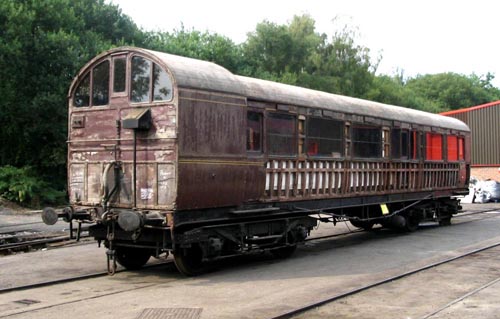 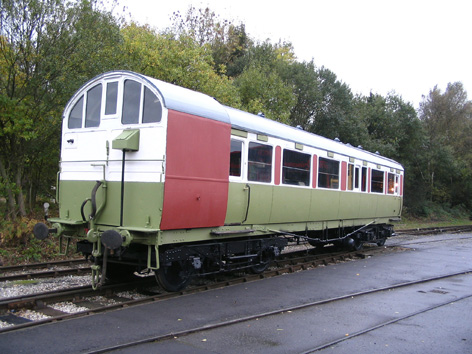 This is how the vehicle appeared prior to being sent to Rampart Carriage & Wagon Services.

after the conservation & restoration work carried out at Rampart Carriage & Wagon Services.

Bob Timmins, his son Ralph and a colleague are now working on site and have already begun work on restoring its exterior to fully lined-out L.M.S. 1938 crimson lake livery, using paint made up locally to exactly match an original sample supplied by Bob. He will later be hand-painting the numerals, lettering and the L.M.S. armorial devices on both sides. 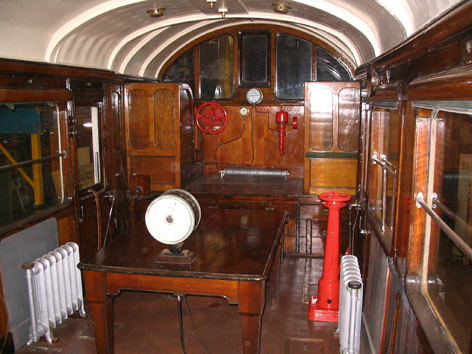 clearly showing the excellent craftsmanship by

Other project activites continue to programme, including the four full-sized mannequins being made by Gems Studios, the development of the associated displays with blackbox-av including the active video camera system that will provide visitors to a floor level both with a virtual interior visit and the provision of a new display unit showing an historic film of the vehicle's history. Kate Smith continues to work on the educational aspects of the project linked to schools and the Science-based modules 'Pushes and Pulls' within the National Curriculum as reported earlier.

Good progress has been made on the repairs and renewal work of the ceiling panels and the fitting of three replacement marine plywood twin lighting unit mounting pattens. The new wiring for the bulb socket holders has been fitted. The ventilator covers and ceiling hole lining sleeves will now be fitted to complete work on these. 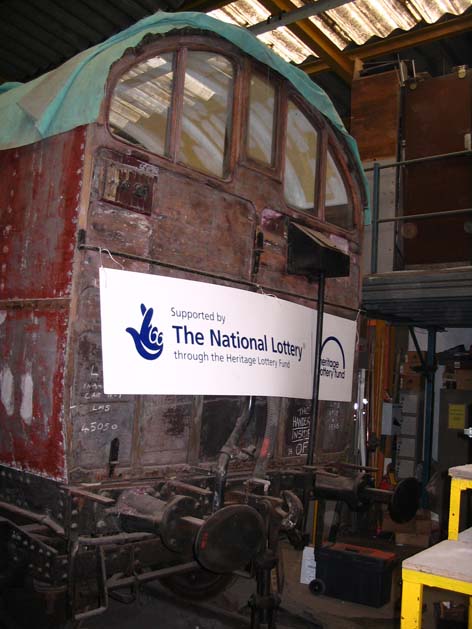 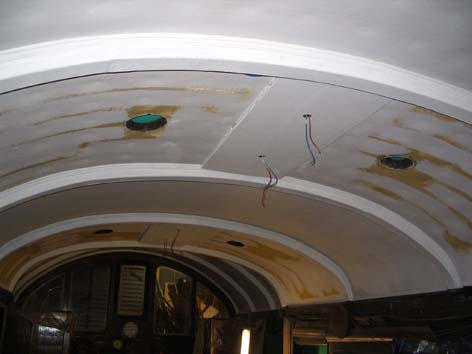 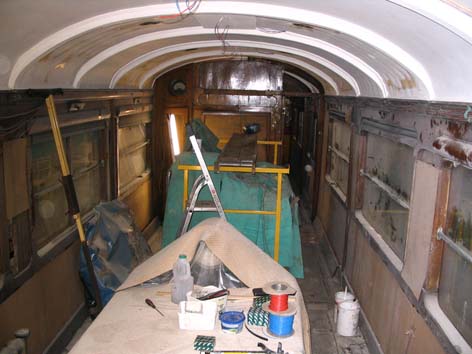 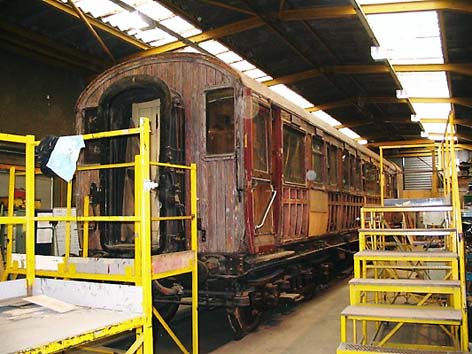 These photographs  were taken of 45050 at Rampart Carriage & Wagon at Derby.

Since receiving official permission to start work from the Heritage Lottery Fund, work has taken place to prepare the vehicle for the first stages of the conservation and restoration work.

The moquette and horsehair seating cushions from the staff compartment and balloon end observation platform seats have now been removed from the vehicle and sent to facilities at Birmingham Museum for deep freeze treatment to kill any insect eggs present. Following this, they will be carefully cleaned and conserved by a professional textile conservator. 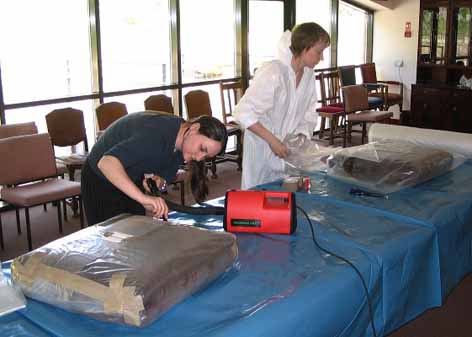 The Trust’s volunteers, overseen by Project leader Brian Radford, have been working hard to remove all loose items from inside the vehicle prior to its move to Rampart Carriage & Wagon Services in Derby. These items are now safely stored at the West Shed and an inventory created for our records. 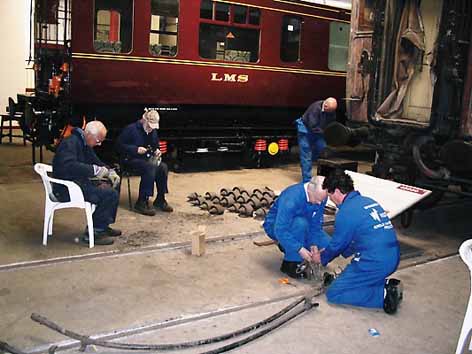 On May 14th the dynamometer car was moved from the West Shed and transported by road to Rampart Carriage & Wagon Services in Derby, where the first stages of the restoration work will now take place. 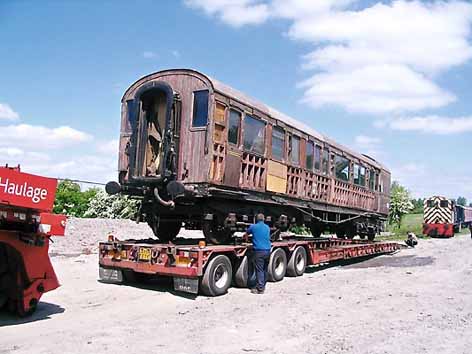 The dynamometer car being loaded at Butterley for haulage