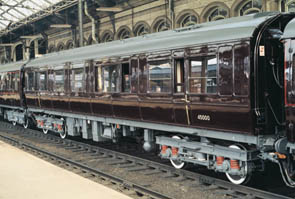 Built at Wolverton in 1920 as a special saloon for the use of Sir Gilbert Henry Claughton, Chairman of the London & North Western Railway, and numbered 5000, this historic vehicle was subsequently taken into the stock of the new London, Midland & Scottish Railway on 1st January 1923 and then became the personal saloon of Sir Josiah Stamp, its President and Chief Executive.

The saloon was used by H.R.H. Prince Edward, The Prince of Wales on a visit to Derby Locomotive Works in 1928, and he later asked to use it for other visits around the country rather than the more luxuriously fitted Royal Train.

Renumbered 45000 in 1933 and re-painted in a unique crimson lake and cream livery, it was also used by V.I.P.’s and members of H.M. Government during the Second World War as well as in Royal Train formations, being repainted in a plain crimson lake livery for security reasons. Post war it continued to be regularly used on Royal Trains by the T.R.H.’s Princess Elizabeth and The Duke of Edinburgh and other members of the Royal Family as well as by LMS General Manager’s.

In 1948 it became part of British Railways stock, and continued to be used as before, often in trains conveying H.M. Queen Elizabeth, The Queen Mother, and from 1952 by H.M. Queen Elizabeth II and H.R.H. The Duke of Edinburgh. Renumbered 2911 in the Royal Train fleet list in 1982, it continued to be regularly used until 13th-14th February 1989, when H.R.H. The Prince of Wales made a journey from Kemble to Todmorden. The coach was withdrawn in 1990. 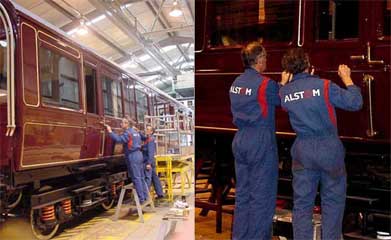 Gold leaf being applied to 45000 at Wolverton

When withdrawn in 1990 it was the oldest vehicle in the Royal Train fleet and, because of its fascinating history, it was duly claimed by the National Railway Museum at York to form part of the National Collection. Exhibited at a Wolverton Works ‘Rail Safety Day’ on 25 th September 1993 with Royal Train coats-of-arms and other memorabilia, it was then moved to the Ministry of Defence depot at Kineton in Warwickshire for storage.

45000 was acquired by the National Railway Museum and stored first at Wolverton Works and then at Kineton. Having stood in the open for ten years, the Trust approached the N.R.M. with a view to restoring the vehicle and adding it to its collection for display in its new museum. Following negotiations it was eventually donated to the Trust on 10 th November, 2003. It has since been externally restored at Wolverton by tradesmen of 'Alstom' and qualified volunteers from the trust, under the watchful eye of Chris Hillyard, the Royal Train Manager. It has now been re-painted in the special fully lined-out L.M.S. crimson lake livery which it first acquired in the 1940’s and given its earlier number 45000 once again. 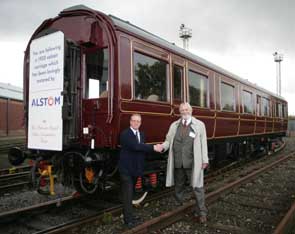 45000, externally restored at Wolverton, is handed over to Brian Radford (PRCLT), 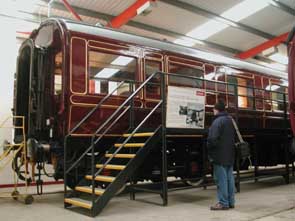 in the West Shed.

This unique vehicle forms a direct link back to that early 1930’s period of L.M.S. history when Lord Stamp, who regularly used it for personal travel over the railway’s system, exerted great influence as both the President and Chief Executive of the company and Sir William Stanier had just arrived as its new Chief Mechanical Engineer to revolutionise the types of motive power then available and produce new designs, including engines capable of working the heaviest express passenger trains. This resulted in the appearance of the ‘Princess Royal’ and ‘Princess Coronation’ class locomotives, one of each of which are the part of the trust’s collection.

Since Saloon 45000 moved to the West Shed in 2005, the interior has been gradually restored by volunteers 'room by room' including replacement and repainting of rotten wooden panels, re-wiring of original light fittings and cleaning of carpets and furniture.

In 2012, Saloon 45000 featured as a special invited guest at the ‘Goodwood Festival of Speed’. During this event the Saloon was part of a display of Royal vehicles to mark the celebrations of HM The Queen’s Diamond Jubilee year. Volunteers accompanied the Saloon and welcomed thousands of visitors inside. Following this, in July 2013 the PRCLT won the ‘Work with Collections’ category award at the ‘Derbyshire Heritage Awards’ for the restoration work carried out on Saloon 45000 and its display at Goodwood. This award reflects the high standard of work that has been carried out by volunteers on the Saloon over the past few years, for which the PRCLT is grateful.