On special event days the 21 inch gauge locomotive 6203 'Princess Margaret Rose' may run a train on the demonstration track outside the West Shed. Whilst rides have been given in the past to specially invited PRCLT Patrons, we do not operate an official passenger carrying railway so, for reasons of insurance and health & safety, rides are not available to the general public and are not advertised as being available. 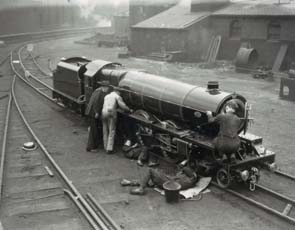 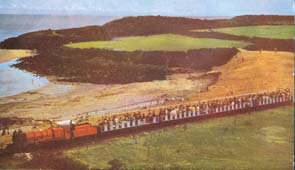 These two miniature locomotives were ordered by Mr Billy Butlin for use in transporting visitors over the 21 inch gauge lines at his holiday camps at Skegness and Clacton, the locomotives were 2/5 th scale outline models of Stanier’s ‘Princess Royal’ class 4-6-2 locomotives built at Crewe and introduced in 1933 to haul the fastest expresses trains over the London, Midland & Scottish Railway main lines.

Named after the two Royal Princesses by special permission of His Majesty King George VI, who asked to see the drawings before giving his consent, the first to be completed on 14th March, 1938 was

No. 6201 ‘Princess Elizabeth’ which was turned out in a London, Midland & Scottish Railway crimson lake livery with ‘Skegness Special’ painted around the top of the smokebox and ‘Butlin’s Holiday Camp Special’ on either side of the chimney, whilst the second No. 6203 ‘Princess Margaret Rose,’ was completed on 19th April and painted in an untypical London & North Eastern Railway green livery with, in her case, the top ring of the smokebox lettered ‘Clacton Express.’

After completion the two locomotives, along with eight air-braked ‘toast-rack’ type carriages on four wheeled bogies - each seating 30 passengers three abreast - went initially to the Empire Exhibition, Scotland, 1938 which was opened at Bellahouston Park, Glasgow on 3rd May by Her Late Majesty Queen Elizabeth, The Queen Mother, after which the Royal party and other distinguished guests enjoyed a trip round the 950 yard single track circuit. This had a passing place half way around and a 30ft radius circular loop at each end, and the line was worked by token. Both trains operated when the park was busy, the normal speed being around 6 m.p.h.

No less than half a million other visitors also had a ride during the course of the exhibition, including the Rochdale born singer Gracie Fields and the miniature railway engineer Henry Greenly.

After the Glasgow Empire Exhibition closed 6201 ‘Princess Elizabeth’ went with one of the rakes of four coaches to the first Butlins camp at Skegness which had been the first to open at Easter in 1936. Here up to 4,500 campers could stay for a week for only £2.25p each, which not only included accommodation and four meals a day but also entertainment by Butlins famous ‘Redcoats’ and later on such budding celebrities as Des O’Connor, Tommy Steele, Cliff Richard and Max Bygraves.

6203 ‘Princess Margaret Rose’ went initially to the Clacton camp in Essex which had opened only that year near to an existing Butlins amusement site. Here she ran on a miniature railway circuit laid from a station built opposite the dining room past the boating lake to the sea, a distance of about one mile.

Closed during the Second World War, the existing holiday camps re-opened and proved so popular that more camps were built by Butlins to cater for the need for more of this relatively cheap and popular style of family holiday.

As to the engines, both are recorded as being together at Skegness by 1949-50, but 6201 ‘Princess Elizabeth’ was later moved to the Heads of Ayr camp in Scotland which opened in 1947.

By 1956 6203 ‘Princess Margaret Rose’ had moved to the Pwllheli camp in Wales along with her original set of four coaches and, now repainted in L.M.S. red livery, she operated on a new line built to link the main camp at Pen-y-chain to the beach some two miles away. This new 250 acre camp, opened in 1947, could take 9,300 visitors and had been adapted by Butlins from wartime navy accommodation known as ‘H.M.S. Glendower.’

In May 1963 the full sized Stanier 4-6-2 ‘Princess Margaret Rose’ herself arrived at the Phllheli camp site, having been purchased from British Railways following her withdrawal from traffic. Repainted in a representative L.M.S. crimson lake livery at Crewe Works she was delivered to the camp by rail and displayed on a length of track in the children’s playground area as a popular visitor attraction. As a result it seems that a decision was made to re-name the 21 inch gauge engine No. 6203 ‘Queen Elizabeth’ and a tin plate bearing a painted version of that name was fixed over the ‘Princess Margaret Rose’ nameplate on one side. She was certainly so re-named by June 1966.

6201 ‘Princess Elizabeth’ later moved with three of her original coaches to Butlin’s Minehead camp, which had opened at Christmas, 1962 and she remained there until around 1970. Now needing major repairs, she was moved to the Pwllheli camp to join 6203, her tender following later.

On special event days the 21 inch gauge locomotive 6203 'Princess Margaret Rose' may run a train on the demonstration track outside the West Shed. Whilst rides have been given in the past to specially invited PRCLT Patrons, we do not operate an official passenger carrying railway so, for reasons of insurance and health & safety, rides are not available to the general public and are not advertised as being available. 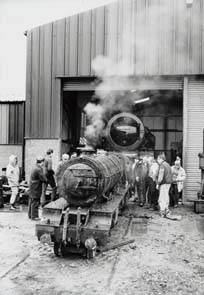 Together again after 25 years.

With both locomotives now lying out of use, J.H. Rundle Ltd. General Engineers of New Bolingbroke near Boston in Lincolnshire, a firm specialising in dealing in miniature and narrow gauge locomotives, purchased them with a view having them repaired and selling them on. 6203 moved to their yard by road in April 1971 and 6201, already in a dismantled state, followed early in 1972.

The two locomotives remained in Rundle’s yard in un-repaired state until 1978 when they were sold to John Wright, a scrap dealer with premises at Whaploade, near Fenland Airfield, Holbeach St. Johns, Lincolnshire. He intended to restore them to full working order and, having also acquired the remains of three of the original bogie coaches and a quantity of track, intended to operate them on a line laid down on his own site. However no work was actually done on them at that time.

Whilst writing a monograph book with Brian Radford about the full-sized No. 6203 ‘Princess Margaret Rose’ which Brell Ewart had purchased from Butlin’s in 1988 which at the time was being restored to full main line operating condition by the trust, a letter came from Neville Knight advising him of the collection of 21 inch gauge locomotives and rolling stock still in John Wright’s yard. Brell Ewart decided to purchase the whole collection, and all of the items were recovered by working parties on 23rd and 25th February 1991, and all most moved to the West Shed site, the new home of the trust.

6203 was fairly easily recoverable from the front of the yard, but 6201, in its dismantled state, with the upturned chassis being buried in mud amidst weeds, brambles and nettles, proved more difficult. Surprisingly the original nameplates and builders plates were still in situ. The remains of the three bogie coaches, by now in a very bad state, plus quantities of track were also recovered.Upon arrival the engine of 6203 was briefly coaxed back into life on 25th February, but the transmission could not be made to function – not surprising after 20 years out of use!

Since that date the small 21 inch Gauge Group of trust members, headed by Graham Oulsnam, have worked wonders. 6203 has been completely stripped down and rebuilt, every part being renovated and repaired or replaced, the engine and gear box overhauled and the braking system refitted. Its tender has likewise been overhauled, and the transformation is quite unbelievable. Re-united with a tender restored elsewhere, the locomotive was brought to life again briefly for the first time on 20th January 2001. The team has also been responsible for the magnificent effort that resulted in one of the ‘toast rack’ bogie coaches being completely rebuilt. Fortunately, enough of one seat remained to permit accurate replicas to be made by Eddie Dolby, whilst the underframe, bogies and running gear have also been repaired and air braking equipment re-fitted.

Work continues on the second locomotive 6201 ‘Princess Elizabeth’ that will require the manufacture or repair of many major parts. Considerably more time and effort will be needed since she lacks a number of major components including an engine and gearbox and axleboxes, so she will be a static exhibit only for the foreseeable future. 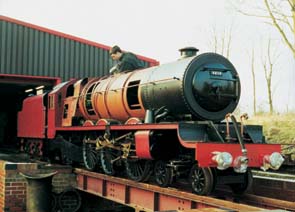 On 20th January, 2001 ‘Princess Margaret Rose’ was complete enough to start the engine and she moved slowly out of the workshop with only ‘boiler’ and ‘firebox’ cladding to fit after checking that all was well. (Brian Radford) 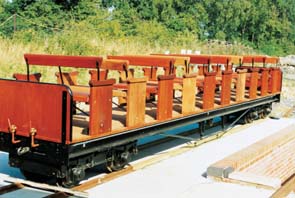 Now rebuilt from the sparse remains of the best of the original bogie coaches, the first ‘toast rack’ stands outside the workshop – a testimony to the abilities and hard work of the team. (Brian Radford)

At the West Shed a short line connected to the '21" exhibition gallery allows for the occasional operation of the restored 6203 locomotive and coach for demonstration purposes. This project has been achieved thanks to a 75% grant towards the £23,000 plus cost from the ‘Prism Grant Fund’, administered by the Science Museum in London, and the totally dedicated efforts of each and every member of the 21 inch gauge group.

On special event days the 21 inch gauge locomotive 6203 'Princess Margaret Rose' may run a train on the demonstration track outside the West Shed. Whilst rides have been given in the past to specially invited PRCLT Patrons, we do not operate an official passenger carrying railway so unfortunately, for reasons of insurance and health & safety, rides are not available to the general public.